And you know why it was screaming because that thambi Samy the Velu was the one who secured the whopping RM10 billion! Okay…now read some more….

Kuala Lumpur and Bangladesh inked a Memorandum of Understanding (MOU) to facilitate the implementation of the projects here last night.

Opps its not secured yet! They are just inking a Memorandum of Undertsanding.

A memorandum of understanding (MOU) is a document describing a bilateral or multilateral agreement between parties. It expresses a convergence of will between the parties, indicating an intended common line of action. It is often used in cases where parties either do not imply a legal commitment or in situations where the parties cannot create a legally enforceable agreement. It is a more formal alternative to a gentlemen's agreement.

Dey thambi…no LOI (Letter of Intent)…no LOA (Letter of Award) …just an MOU! How can you say you have secured   RM10 billion worth of projects….ini tipu ni!

Anyway I have said my piece...if you want some laughs go read the following story from Bernama! 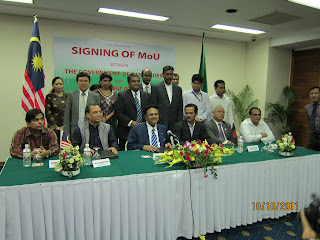 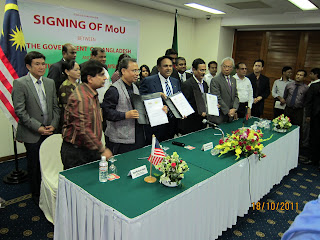 Kuala Lumpur and Bangladesh inked a Memorandum of Understanding (MOU) to facilitate the implementation of the projects here last night.

The document would be handed over to the Bangladesh Prime Minister Sheikh Hasina by Samy Vellu here on Thursday. 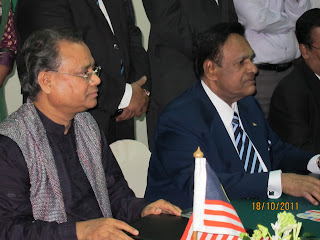 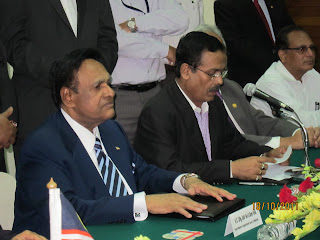 Describing the deal as a "win-win", the former Malaysian works minister who is on a four-day working visit to Bangladesh, said the projects include housing; satellite townships; a flyover and water treatment, and sewerage treatment plants.

He said the first project involving the construction of 161 blocks of 16-storey apartments, worth almost RM3 billion, in Uttara near here would commence early next year.

"Both governments (Malaysia and Bangladesh) sealed the MOU after more than six months of negotiations. It is indeed a proud achievement for Malaysia," Samy Vellu told reporters after signing the MOU on behalf of the Malaysian government.

Samy Vellu, who was appointed the Special Envoy with Ministerial rank for Infrastructure to India and South Asia last January, said work on the RM3 billion apartment project was expected to start in a few months after the signing of the agreement.

Another project that would take off next year would be the 10.8km four-lane Poltan-Mawa Road flyover project worth RM1 billion, he said.

Samy Vellu said other projects include the construction of affordable housing for squatters and a new satellite township on a 400 hectare land at Kamrangichar and another similar development in Mohammadpur here.

"Malaysia will also construct the Dhalla-Jamirta well field to supply clean water to Dhaka," he said, adding that several Malaysian companies have shown interest to participate in the RM10 billion project.

Samy Vellu said the Construction Industry Development Board (CIDB) would monitor and act as the executing agency for the projects to be jointly undertaken with the respective departments in Bangladesh.

"I am happy that after months of discussions and negotiations, we (Malaysia and Bangladesh) have finally agreed to implement the projects," he said.

Samy Vellu also said the next step would be to finalise the costing and other aspects of the projects and then seal agreements between CIDB and the respective departments in Bangladesh.

He added several Malaysian companies have been identified to undertake the projects, some through joint ventures, with interested parties.

"I will brief Prime Minister Datuk Seri Najib Tun Razak upon my return to Malaysia (on Friday) and then hold a media conference to explain about the projects in detail," he said.

Email ThisBlogThis!Share to TwitterShare to FacebookShare to Pinterest
Labels: bangladesh, Samy Velu...show off.