For now the winds of change blows towards Azmin Ali..... 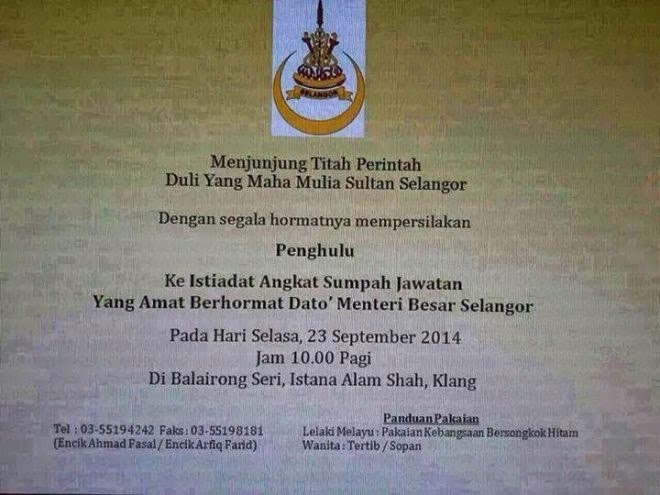 There you have it...irrevocable proof that there shall be a new Meteri Besar in Selangor by next week...ok lah ..by 23rd September 2014 if you want to get technical....unless the above invitation is yet another 'silap mata' by person's unknown out to make more mischief in an already bizarre sandiwara that has fascinated more  people than there are rambutans in season on a rambutan tree!

Yesterday, the Selangor sultan’s private secretary, Datuk Mohamad Munir Bani had confirmed that the invitation card to attend the swearing-in ceremony is authentic and the ceremony is scheduled for 10am on Tuesday, 23 September 2014.

So far logic deduce that the only people who knows who will be the next MB is the Sultan and the incoming MB.......and both are not talking!


And so far about the only sure thing that everybody on both sides of the divides are agreed upon is that Anwar's wife will NOT be MB.


What happens after Tuesday the 23rd of September?


For one thing what Anwar, PKR and DAP have been working feverishly for in the past year or so will come to be. Tan Sri Khalid will cease to be MB of Selangor.


But at what cost and for what gain for Anwar and Pakatan Rakyat?


This question will only be answered at the next general election when the electorates will finally speak their mind with deafening clarity. Until then we can debate to our hearts content.


Suffice for me to say that the loser, Tan Sri Khalid Ibrahim is really the winner. By his petulant display of a man aggrieved by what he considers the treachery by his own kind, Khalid had stood his ground, did not blink and told Anwar and his cohorts  "F@*k You!"

Khalid has put Anwar Ibrahim, PKR and Pakatan Rakayat under more strife than what UMNO and the Barisan Nasional coalition could possibly hope to achieve even it it tried. It is my opinion that all things considered, things could have been done differently to ensure that the same end result be achieved. The collateral damage from this unfortunate incident have already exposed the raw underlying tension that lies just beneath the surface of this unlikely coalition of three political factions with diverging ideologies that common sense tells you can never be reconciled - not when the only thread that holds them together is their common enemy, Umno.


Pakatan Rakyat needs a more tangible thread to hold it together (good, decent and responsible leaders for a start!) and what has happened in Selangor has stretched the coalition almost to its braking point. Some have even argued that the Pakatan Rakyat coalition is already beyond saving...or more worrying...questions are being asked if it is even worth saving!

For now we wait for Tuesday to see if the wisdom of Solomon or the expedience of politics will rule over the duty of the Sultan of Selangor to chose an MB worthy of Selangor. The maturity of any society is always tested when it encounters change of any sort that affects it socially  and politically.....the question left to be asked is whether the Sultan will abuse the responsibility entrusted unto him to do the right thing for the people of Selangor.

For now the winds of change blows towards Azmin Ali.

A case can be made for and against Azmin Ali NOT being the MB of Selangor but if you want to count the numbers of those within PKR who will stand with and behind Azmin Ali as MB of Selangor, you will find that he has gathered enough around him to claim the MB post in his own right. Azmin, not Azizah, has the numbers.

And in his own right means just that....he is his own man who can lay valid claim to having the numbers within PKR because he has worked quietly, tirelessly and responsibly within PKR and Pakatan Rakyat to ready himself for just this moment - to put himself forward as a credible candidate for leadership within PKR - and if that means putting himself forward as the MB designate, so be it.