Has Everyone Gone Mad? 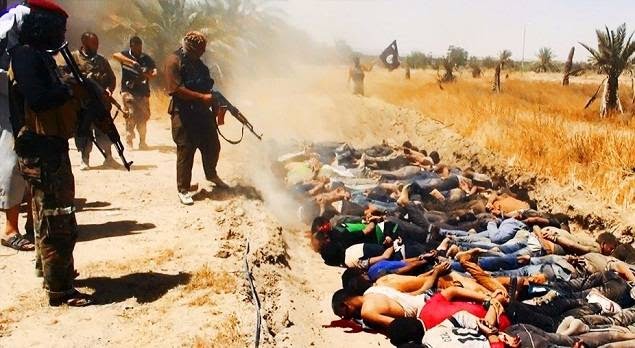 How many of you have actually sat through those videos where people are being gunned down  - executed, killed, murdered...you can call it whatever you want...images of people being shot in the back in large numbers somewhere in the deserts of the middle east? If you have then you have more gumption than me - I cannot bring myself to watch too many of these atrocities!


We are told that the one doing the killings are Jihadist Terrorists, ISIS Jihadist, Syrian Jihadist and their ilk. Once in a while you can hear shouts of Allahuakbar as they fire into the bodies of those lying in the ground before them. This is not killing people in hand to hand combat. This is not killing people in battle. This is killing people with hands tied behind their back or they are asked to lie of the ground or blindfolded before their life is snuffed out for no other reasons then because their captor can do so.


Then there is the beheading of Americans, British, Catholic Priests and who knows who else! 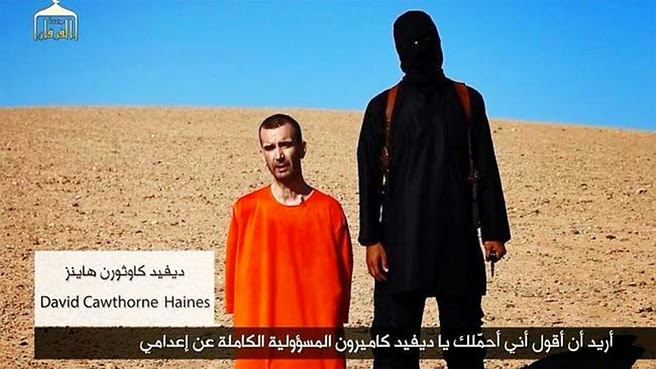 And as if these killing were not enough the President of the United States tells us that the US of A "will degrade, and ultimately destroy, ISIL through a comprehensive and sustained counter terrorism strategy".

Has everyone going mad?

These numbers will be far far in excess to the numbers that are now being killed by ISIL and their ilk...if what America have done in the past to Vietnam, Cambodia, Laos, Afghanistan, Iraq etc are any guide.

How many people does one bomb kill? The one in Hiroshima killed between 70,000 to 80,000 people. In Nagasaki over 40,000 people died. How many bombs will the Americans be dropping to degrade and ultimately destroy ISIL?

The thing about these bombs being dropped by the Americans on people on the ground is this.......we do not see anybody dying. Just a puff of dust and buildings falling down...no close ups of people injured or dying, no images of heads being blown off, no images of mothers cradling their children while fleeing from Jihadists Terrorists...none of these things. Just a big bang, a puff of dust and smoke...and what is left is a pile of dirt....even the bodies amongst the pile of dirt are also indistinguishable from the dirt that they are buried in.


Of course the Americans will not be dragged into a ground war! Why get involved in a ground war when you can kill much much more from the air without even getting your shoes dirty!

I am no supporter of any Jihadists or Terrorist anywhere on this planet. For all I care these terrorists should be gathered in one place and blown up so that they will get to the 44 virgins waiting for them in heaven quicker...but I do not think that it is fair to refer to these terrorist as Muslims. Throughout history there just as many blood thirsty Christians as they are blood thirsty Muslims. People kill each other in the thousands in places all over this planet for many many reasons .....but for most of the time people go to war "to keep the peace". Especially the "peace loving" Americans!. Anywhere you can find Americans fighting, they will be fighting to keep the peace...even if it costs them $100 million a day to do that!

Take all that into perspective and then maybe you will begin to think that these two bits tin pan alley Jihadist fighting over some territories in the desert are not really that bad - even if they are doing all they can to kill a few thousands of their enemies....be it other Muslim, Christians or whoever gets in their way.


Maybe in this age of the Net where anything and everything that happens in any part of the world are instantly beamed into our living room even as we are about to sit to dinner with the family, it is not surprising that we are privy to beheading, executions and slaughter of human beings on demand and sometime inadvertently as we are innocently surfing the Net.

I have made a conscious decision to limit myself from watching too much of these disturbing and horrific images that present itself to us on youtube and facebook. I do not watch it not because I do not care or do not feel for the suffering of these victims of man's inhumanities to others....but there really is nothing to be gain from the experience of watching too many of these atrocities....you become so numb and blase about them that you do not even pause from eating that fried chicken on your plate even as another 100 human beings are being shot in the back. I know because I found myself doing just that last week as I saw yet another execution by these Jihadist terrorists.

What a world we live in! Stop the world I want to get off!