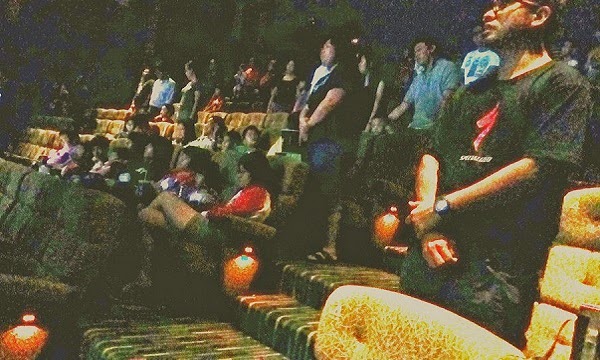 This image uploaded onto Facebook by Anwar Miswan allegedly shows movie-goers not standing up when the national anthem was played. It already has 959 shares and has garnered over 40 comments at press time. — Pic credit Facebook Anwar Miswan

Anwar claimed that the majority of those who did not stand up were Chinese.
“I am proud to be a Malaysian. When the cinema showed Negaraku, everyone stood up, Indians, Malays, but this race? Is this 1Malaysia?
“I’m not trying to be racist but this is a reminder, those who reside in Malaysia should show respect! There were three languages at the screen telling the audience to give their respect.
“The truth is, if they’re asked to sing the national anthem, I doubt they’ll be able to do so. So this is Malaysia!”

Lim Keith, posted: "Chill bros ngan sis… saya rasa tak kira bangsa ape pun ada org macam ni… yg pasti kita yang ada, bangga sebagai anak Malaysia.
(“Chill brothers and sisters, I feel regardless of race there are some who are like this. We need to be proud as Malaysians ourselves.”)
Posted by STEADYAKU47 at Wednesday, September 17, 2014