Mior Rosli : Let me tell you and all your bloody UMNO goons ... THERE ARE NO RACIAL CONFLICTS AMONG SOLDIERS WITHIN THE MAF. 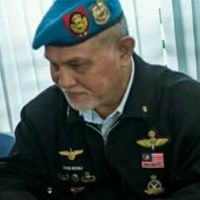 A powerful rebuttal by the Sec Gen of Persatuan Patriot Kebangsaan (National Patriot Association) to the Defence Minister's caution of Patriot's recent Press Release.
"I would like the Defence Minister & his Deputy to listen very carefully to what I have to say....

Yesterday, Hishammudin accused Persatuan Patriot Kebangsaan of being Racist. I demand you to say sorry to us because it is not us who are racist ... it is you. Don't you remember when you were the UMNO youth chief? You unsheathed the Keris in the air and waved it while demanding for Chinese blood? Isn't that Racist and dangerous? The police should have charged you with ISA and put you behind bars. We don't need Racist people like you leading a multiracial country. Now just because the General Election is around the corner you have the cheek to talk about increasing the number of non-malays in the Armed Forces. We have heard of this many many times in the many years that have passed.

Let me tell you and all your bloody UMNO goons ... THERE ARE NO RACIAL CONFLICTS AMONG SOLDIERS WITHIN THE MAF. We have gone through tough team training day and night for 6 months for the other ranks, and 12 months training for the officers. We eat, sleep, train, sweat, cry and laugh together. After recruit or cadet training, we were enlisted and commissioned into our various corps and services. Except for the Royal Malay Regiment, in all corps and services we were not concerned if our fellow comrades was a Malay, Chinese, Indian, Punjabi, IBAN or Kadazan. Whatever race and religion, our loyalty only went to our Commander, to our Corps/services, to the MAF, to our King and country. That was how we were taught and trained.

During both emergencies (1948-1960/1960-1989), during the confrontation with Indonesia, and the war in Sarawak, till the early 90s ... we fought like brothers, to defend and maintain the independence of this country. We made sure that people like you would be safe, and enjoy your freedom in this country.

You were born with a silver spoon ... you only show off donning a military uniform, with a Commando beret, with senior airborne wings on your chest. You made many veterans sick, looking on at your stupidity.

During the emergencies, combating the CTs, there were many non-Malays, who were involved in clandestine operations, became agents in the enemy ranks, and acted as rubber tappers, farmers, etc. Some were caught and killed.

Our pilots, many were non-Malays, too were shot down. When they took part in rescue work, bodivac and medical missions, they didn't care if the dead or injured were Malays, Chinese, Iban or Indians, or whatever race the victims were.

Today UMNO is kissing lips with the CPC. Having closed door meetings, all for power and money, forgetting the sacrifice that the armed forces rendered to save the UMNO, so that it is in existence until today.

If you want the Chinese to show their loyalty, make the Armed Forces more professional and non-Political.

We, the veteran Armed Forces Officers and the ex-senior police officers are the real Patriots. More Patriotic than any of you, "power and kleptocracy" crazy politicians. DON'T EVER BELITTLE US. IF THERE IS A WAR TO DEFEND THIS SOIL, WE WILL BE THE SECOND OR THIRD LINERS BEHIND THE REGULAR FORCES TO DEFEND THIS COUNTRY! PLEASE DON'T MESS US UP WITH YOUR POLITICAL DREAMS!!!

What your party are doing towards the MAF is degrading it, making it weak, making the Generals like 'puppet on the strings', until they do not know what is right and what is wrong.
You are making the Rakyat live in a "BOILING FROG SYNDROME". By the time the Rakyat realise what has happened to this country, it will be too late.

The problem with politicians like you is that you rose up not from the grassroots level ... from the beginning until now you are just "A TORTOISE ON A POLE". Don't know how you got up there ... but just because your father was the PM, if not you are nothing.

The majority of us, who served from 1948 - 1989/91, are still very much alive. Your party betrayed us, ignored us, and lied to us. Many of us are struggling to live on with our lives ... while over all these years, you and your party members became kleptocrats and took away what actually belong to us and the Rakyat.

May Allah curse all of you if you don't realise what you did are wrong.