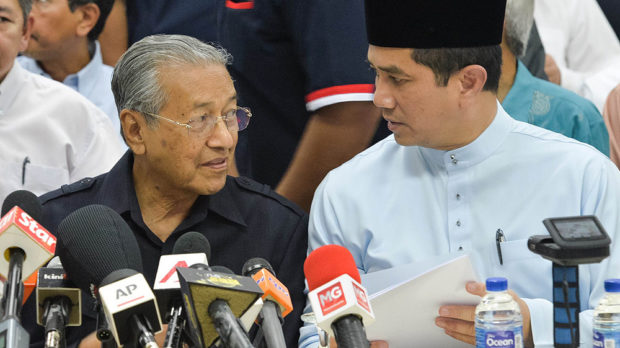 It would seems that Azmin Ali can do no right!

Every day in many ways some one NOT from the Barisan Nasional enclave is doing the job for them. Someone from Pakatan Harapan ? Some one from within PKR perhaps?

This morning I woke up to this headline :

All this with a regularity like clockwork....like a broken record....with a monotony that sickens and disgusts me....someone NOT from the Barisan Nasional enclave is stabbing Azmin Ali in the back, thrusting the knife deeper into him with each passing day and now twisting the knife, the whole knife and nothing but the knife....to ensure Azmin Ali dies a political death.

Surely, you may tell yourself, if even PAS with whom Azmin Ali has been dallying with for as long as you can remember....surly if PAS thinks Azmin Ali is a back stabber, over ambitious and everything else that gives politicians a bad name...then surly Azmin Ali must be all that and more!

And yesterday I read that his offering of his Gombak seat to Mahathir is now construed to be  "likely an attempt to stop the latter from becoming prime minister, should the coalition win the next general election".

When words like "likely", "speculate", "perhaps", "I don't know". "based on our analysis" are being used to frame any opinion or facts, you should best use your own judgement and common sense to come to your own conclusion about what is being discussed, debated and speculated.

This much I know of Azmin Ali.

This much I now know of Azmin Ali.

Am I saying, that once again PKR is doing itself in? Yes I am. Am, I saying that given enough rope, PKR can easily hang itself until dead? Yes I am. And all this PKR is doing to itself because too many in PKR cannot see beyond the tip of their political nose....and I am getting sick of this periodic attempts by PKR to rid itself of anybody they deem "unfit for purpose".....PKR's purpose...whatever that purpose is. And we now know by what is now happening, Azmin Ali has been deem to be not fit for PKR's purpose.

I hope this idiocy will stop. I hope Tun Dr Mahathir will do what needs to be done to make things right in PKR and in Pakatan Harapan. Azmin Ali is good for PH. Azmin Ali is right for PH and Azmin Ali is needed within PH.....and Yes...Azmin Ali is a threat to anyone who has his or her eyes on being the prime minister of Malaysia.

A "threat" because today, Malaysians value meritocracy above all else. A "threat" because he, among a few others, represent the "new normal" of politics in Malaysia where power, respect and position is earned not because of who you are but because you have earned that right to lead and the people have given you the mandate to be their leader.