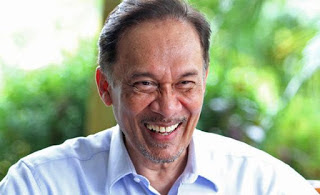 Ten years ago I said my final goodbye to KL. I now call Australia home. Every day in many ways I and my family have been the better for doing so. If I look around me I am comforted by the presence of my wife and son and the life that we now lead. Not a life of great comfort or of plenty, but certainly a good,decent life. Even as old age takes away from me much of what I once took for granted - good health and the ability to take care of myself and those that I love - the future still holds no great uncertainties for me......only the promises of a good life in the twilight of our remaining years. Australia will take care of me as it is taking care of me and my wife now. We have enough to eat, a roof over our head and the means to allows us to enjoy what is left of our life in comfort and with dignity. And in times of needs I have friends to help me through the tiring times.

Such a person is Anwar Ibrahim....he is just a step away from greatness.

His trials and tribulations have become ours. When Najib prosecute and persecute Anwar Ibrahim, the is also prosecuting and persecuting us. When our judiciary are compromised by the demands of their political masters to incarcerate Anwar, a part of us goes to prison with Anwar and it is our judiciary that has been compromised! And today when the opposition is denied the leadership of Anwar Ibrahim, we are also denied the leadership we need to to bring our people together and move ourselves towards changing our country's political malaise. Thank God we still have Mahathir and Lim Kit Siang.

He choose to fight his political battle with Anwar as cowards do...with the assist of a PDRM that fawningly second guesses the needs of it's political masters with a regularity that deserves only contempt from us and a complicit judiciary that shames itself by pandering to the wishes of this Umno led BN government for their own immediate personal and financial gain!

He will be back among us in the fullness of time. Stronger for having gone through another period of trials and tribulations. I hope in the conduct of his personal affairs he will be much wiser than he has been in the past and in the management of all things politics, I hope he will understand his responsibility to our people, our nation and to our future that will transcends his personal self. And may God give him the strength to do that!