There are not many institution, statutory bodies or any other entities left in Malaysia under the control of this Idiot of a prime minister that has got Rm$2 billion to pay for a piece of land. I guess Bank Negara is about the only one left and of course this Idiot sees it fit to instruct Bank Negara to melabur RM$ 2 billion to purchase that piece of land.
I know it is a done deal...and a substantial sum of that RM$2 billion is already making it's way into Najib's pocket if it has not already parked in his personal account!


And of course there are a few executives in Bank Negara involved in the decision making/rubber stamping process of buying the land, who has also profited from the scam. Yes I call it a scam....a scam that this Idiot of a prime minister agreed to so that he and his wife's greed can be satisfied.
And of course the AG (Judiciary) and the AG (Accounts) will sooner or later announce to us all they have carried our a "no stone unturned" investigation into the Bank Negara land scam and can conform that the purchase of the land by Bank Negara was "above board" and involved no criminal acts by anyone.. including the Prime Mnister and the Governor of Bank Negara.
Done deal. And they all ran all the way to the bank laughing their heads off at the thought that once again they have managed to rob the rakyat blind.
Think of it friends....Bank Negara buying land from the government for RM2 billion ! Huh! It pains me that this scam is happening right under our very nose and there is nothing we can do about it...for now! But vote for Pakatan Rakyat in PRU 14 and this, and many other scams, will be revealed, attempts will be made to recover monies lost through these scams and the full extent of the Judiciary will be thrown at the culprits involved in these scams and the guilty ones will rue the day they did Najib's dirty deeds for Najib.
Until that day comes...keep the anger raging. Keep the fire of anger within you burning...and do not forget that in the end right will triumph over wrong, good over evil and Pakatan Harapan will triumph over the despicable Umno led Barisan Nasional...so help me God. 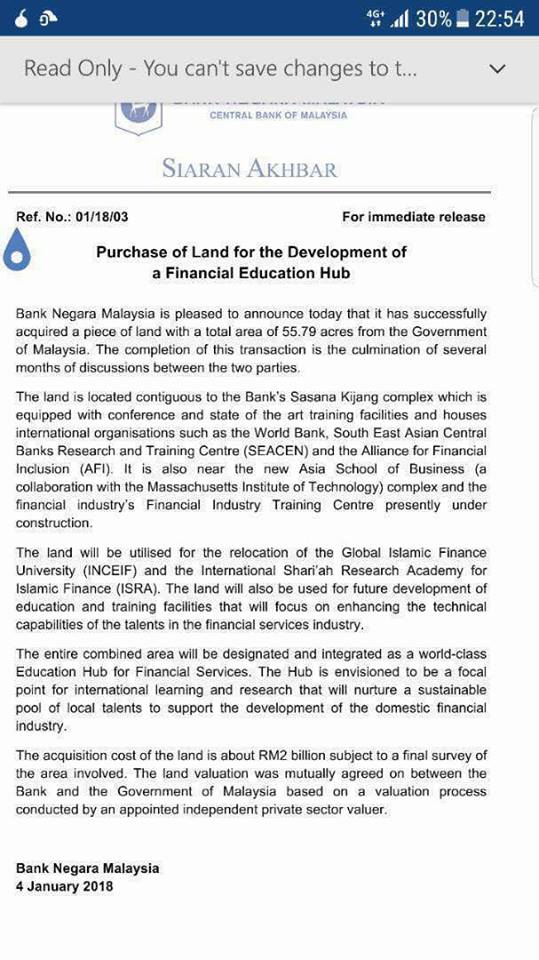