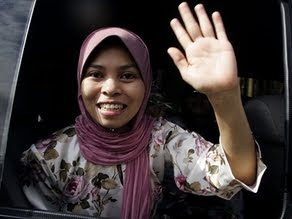 Beer-drinking model's caning to go ahead

A Malaysian religious court has ordered that a caning sentence handed to a Muslim model for drinking beer will go ahead, after a review triggered by a furore over the case.

Kartika Sari Dewi Shukarno, 32, was sentenced by a religious court last month to six strokes, making her the first woman to face caning under Islamic law in Malaysia, a moderate Muslim-majority country.

But she won a surprise reprieve in late August when she was detained and then abruptly released by religious officials who had planned to take her to a jail where she was to undergo the thrashing.

The government said the sentence was "too harsh" and could damage Malaysia's reputation.

However, state news agency Bernama reported on Monday that, after a review of the case, the appeals panel of the Sharia High Court in Kuantan on Malaysia's east coast - where Kartika was nabbed in a hotel nightclub - upheld the sentence.

It said a date for the caning, which was postponed until after the Muslim holy month of Ramadan, has not been set.

"I found that the High Court judge had acted accordingly within his jurisdiction," said Abdul Hamid Abdul Rahman, the chief religious judge of Pahang state, according to The Star newspaper's website.

"As such, the decision stays," he reportedly said.

Kartika, a part-time model and mother-of-two, has stared down religious authorities by saying she is ready to be caned, refusing to appeal against her sentence, and challenging them to cane her in public.

Alcohol is widely available in Malaysia but is forbidden for Muslim Malays, who make up 60 per cent of the population. They can be fined, caned, or jailed for up to three years but prosecutions are extremely rare.

Malaysia, a multicultural country with large Chinese and Indian communities, has a dual-track legal system and sharia courts can try Muslims for religious and moral offences.

Islamic scholars have mostly backed the sentence, and said it would be carried out when Kartika was fully clothed and with a cane that was smaller and lighter than the heavy length of rattan used in criminal cases.