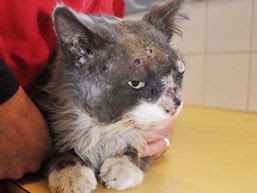 A domestic cat is recovering after being shot 13 times in the head with a slug gun at Maryborough, in central Victoria.

Smokey, the nine-year-old family pet, went missing last weekend and was found by his owners on their doorstep three days later.

A vet was able to remove 11 of the slugs, but two remain lodged in the cat's face.

The Victorian president of the RSPCA, Dr Hugh Wirth, says the incident is shocking and whoever is responsible should be imprisoned.

"Jail is the only way to teach people a lesson, almost certainly these will be young males around about the age of 18 to 20 who have done this," he said.

"It's a pattern that we see throughout Australia and there's only one way to deal with it and that's jail."

He says cruelty towards cats will continue unless community attitudes change.

"One of the biggest problems we've got here is firstly the Australian male who believes that cats are of a feminine character, the second problem is that conservationists have condemned the cat as the big killer of native wildlife."