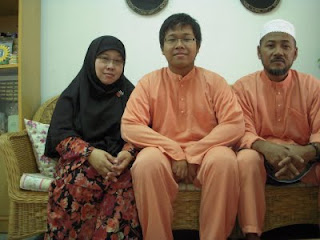 When did these UMNO leaders become thugs and criminals who use violence against their political adversaries and intimidate their own Rakyat through the ISA, MACC, PDRM and other instruments of State at their disposal? Incompetence and conceit have them desperately use ketuanan Melayu to grasp at straws and find excuses of that issue to cling to power. To abuse the trust the Rakyat have placed in them and their complicity with MCA and MIC to supposedly establish a Government of National Unity when the Rakyat lives under a cloud of fear and harresment cannot be right. Najib,Mahyuddin, Hishamuddin, Mahathir, Samy Vely…you are all cut from the same cloth. You are all characterised by delusion of grandeur.

But even under these threats there are still amongst us people who would rather chose ideals then their personal safety and for these people they face perils beyond our ability to imagine.

One of them, Mat Sah, you recently released after SEVEN YEARS AND FIVE MONTHS of incaceration without trial. What manner of leaders would incacerate one of their own Rakyat for that amount of time without trial? Take him away from his  wife and young son – and to have a son grow up for six years without a Father? Do you have any idea what this injustice to Mat Sah has done to people like me? Let me tell you.

It is now after midnight and I am trying to see if I can put my contempt and disgust for you on paper by early this morning  -and then post it on my blog– so that others will read this injustice done to Mat Sah. Then they will in turn tell their friend – and this disgust and contempt for you would, by tomorrow evening be shared with enough people to create a small ground swell of support for Pakatan Rakyat. This is repeated everyday and by every time you do things that harms our other brother and sisters – be they Malays, Chinese, Indians or others.