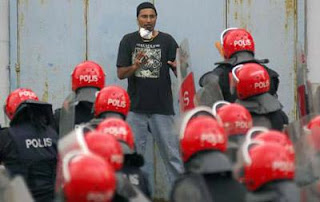 I use to view with amusement the goings on every year of the UMNO AGM at PWTC. The fight between Team A and Team B, spectacle of Mahathir crying on stage, the brandishing of the Kris, gag order, no gag order, contest no contest…the whole spectrum of human failings all there for us to see. But amusement is far from an appropriate response given the anger that I now feel at the way UMNO is still conducting itself despite the wake up call of the last General Election.  UMNO has enjoyed over fifty years of freedom in which they were left alone to do as they wish  - to change, amend, and innovate whatever they choose to do to ensure Ketuanan Melayu and to deliver a united, peaceful and prosperous Malaysia with abundant opportunities for all citizens. They failed.

For the Malays who have staunchly supported UMNO and  unfailingly given UMNO their  votes it has been a challenging time. It used to be the opposition parties that has been looked upon by the Malays with detached amusement as these parties tried desperately to muster the non-Malay votes without much success. Those Malays who openly sided with these opposition parties were regarded as a traitor to the Malay cause. How times have changed.

The myth of UMNO as being the champion of the Malays has long been proven a farce. It might be a myth that UMNO still continues to encourage though we know that that UMNO accomplishments or lack thereof is there for all to see. If the integrity and ability of Singapore Leaders to govern their  City State well is an inspiration to people the world over, and if that made UMNO leaders look like little man, then UMNO has only themselves to blame.

Malaysia needs a new kind of leadership. We cannot build what the Rakyat now wants without competent, clean and skill leaders. This we cannot find from the ranks of UMNO or Barisan.This simple truth seems to elude UMNO and Barisan leaders – but not the Rakyat. We need leaders with humanistic disposition towards their own people. We do not need leaders who came to high office of state just because they can lay claim to the name of Tun Razak or Tun Hussein and by reason of this “pedigree” chose to think that they, their families and their ‘sahabats’ are entitled to rob the country blind. You govern in our name and we pay taxes to maintain you in office and yet you have the audacity to take more from us in the name of national development and Ketuanan Melayu. If Ketuanan Melayu and National Development have not progress it is because of your incompetence. The accumulated opportunities presented to you over the years for the resolution of these “problems” have not been taken. And the reason why you have not done so is attributable to your incompetence – and nothing else.  There is something desperately wrong with UMNO.

Much blame deserves to be laid down at the feet of its leaders who time and time again uttered “Malay Unity” as the rationale for everything that they do and then fed the exuberance of the UMNO masses a staple diet of money, money and more money. MCA and MIC echoed these same sentiments in the things that they do.

While trumpeting the need of an independent Judiciary UMNO handpicked its members so that it will do their biddings when instructed. The appointment of Suhakam, MACC and the various Suruhanjaya were all bluster and no substance.

Left alone these last 50 years UMNO did an astoundingly good job of enriching themselves. But when the time came to fulfil their promise to the Malays and the nation they have shown rather less ingenuity.

Even now Barisan and its components parties continue to publicly unravel their seedy and unacceptable side of how they do things. We are in shock and in awe at the exposure of the deeds of UMNO, MCA and MIC – all can be reduced to four words “for a quick profit”.

Inevitably the people have had enough. Grim as the prognosis is for our country change is in the air – driven by the very people UMNO, MCA and MIC have blind-sided. The Chinese and Indians rejection of MCA and MIC is self evident in the results of the last GE. It is the rejection of UMNO by an ever-increasing number of Malays that has given the opposition momentum and much hope for their future after the next GE.

But the best reason for hope for all of us is that despite the obvious rejection of Barisan by the Rakyat it is still business as usual for them – they are relentless in continuing with their conceit, their deceit and their arrogance towards the Rakyat instead of getting their house in order. For that we have to be grateful.