THE PENANS - LAST OF OUR MOHICANS? 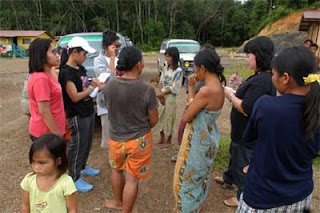 Penan ladies from one of Penan settlements in upper Baram being interviewed by a team from the Women, Family and Community Development Ministry.

In September 2008 The Bruno Manser Fund (BMF) media release said in essence that:


“Penan women from the Middle Baram area of Sarawak are launching a cry of alarm to the international community over cases of sexual abuse by logging company workers in the East Malaysian state's rainforests.


The Penan are accusing workers from Interhill and Samling, two Malaysian logging companies, of harassing and raping Penan women, including schoolgirls.
They come on an almost weekly basis, but the situation is worst during the school holidays when they know the students are in the villages.

In other cases, school transports operated by company vehicles had been arranged in such a way that schoolgirls had to stay overnight at a logging camp, where they were abused.

Complaints by the Penan to those in charge of the logging camps and to the Police have so far had no effect.The Bruno Manser Fund is asking the Malaysian government to start a formal enquiry into these serious criminal offences. In particular, the government is being asked to ensure that the victims are protected and that the harassment of Penan women by company workers is brought to an end immediately”.
On 8th October 2008 cabinet set up the Jawatankuasa Bertindak Peringkat Kebangsaan untuk  Menyiasat Dakwaan Penderaan Seksual on Wanita Penan – to investigate the Sexual Abuse of Penan Women and Girls as contained in The Bruno Manser Fund media release of September 2008.

Here are some of the cases of those sexual abuses that came to the attention of the Jawatankuasa pertaining to the sexual abuse of the Penan Women and Schoolgirls.

Age Group: From as young as 10 onwards.

Case One:
Age 17 years old. Rape at 12 while walking outside the school compound during school holidays. Not surprisingly at that age she was not able to identify her attacker. She was raped once again by a worker from the logging company while getting a lift from the company’s vehicle from her village at Long Kawi to her school at Long Lama. When she realized that she was pregnant she stopped school and married a fellow Penan.

Case Two:
First raped in 2005 by a worker from the logging camp of Inter Hill. She knew him when her Family got a lift back to the village after sending her sister to school. (Walking to school would have taken two days.) He entered her house at night and raped her in her room. She gave birth to a daughter. Second rape was in 2007. The same guy again entered her house at night when she was by herself and the result was another daughter in February 2008. She did not make a Police Report as she was not able to read or write. This same guy claimed her as his wife – but she refused to accept him as he had two other wives – one of which was a Penan.

Case Three:
She knew of two Penan girls – one age 15 and another 20 that had had sexual relationship with two logging workers while getting lifts to leave their village area. This became the talk of the village and both these girls eventually married Penan men and left the village in 2008.

Case Four:
A student age 14 of Sekolah Menegah at Long Sam whose  breasts were fondle while getting lifts to school by the driver of the logging camp vehicle. This is a normal occurrence and the girls reported it to their parent but not to the school authorities. They were worried that the school would accuse them of lying and finding an excuse of not coming to school and then be caning them.
There were claims that members in uniform were also involved in these sexual abuses but the girls were not able to substantiate these claims.

Case Five:
She said that she was regularly abused during lifts to school in the vehicles belonging to the logging company. They were even attempts at rape by these drivers. At the age of 10 she and four other girls’ students, while on the way to school in the company lorry, was almost raped by the driver. They managed to free themselves but were injured and did not attend school on that day.
In another instance she said that the Lorry Driver asked the male students to disembark. They did so and managed to get all the other girl student out except for one girl. The driver drove off with her and to date no one has asked her what happened that day.
At the age of 13 she was introduced to an Iban man who was a logger while visiting her mother in Miri. She was abducted by him and raped. A police report was made. The Police found her at Kem Kilometer 10 with the man and they were brought to Balai Polis Bakong, Beluru and then to the Miri Polis station. She stopped schooling after this incident.
Next she got involved with another logger who plies her with cigarettes and alcohol. Other workers from the logging camps often joined them with their Penan girlfriends to party at their boss house. This relationship lasted two years until he lost interest in her.
She then got involved with another logger with whom she had a child out of wedlock. She stopped seeing him after his wife beg her to stop the relationship.
She then met a businessman who came to buy rattan and gaharu. He gave money and food to her family. She had a child out of wedlock with him now aged two. He soon met a Penan girl and tire of her.

Case Six:
She was almost raped while on her trip with her Father and Family to apply for her ID Card at Long Bangan, Baram. In the middle of the journey the driver stopped the vehicle and asked her family and the other passenger to disembark while holding on to her hand. Then he sped of with her. She struggled and he had to stop the vehicle. Then he dragged her into the bush but by that time her Family and the other passengers caught up with them and he did not have the time to do anything.

Case Seven:
She was aged 17 and had just given premature birth at Hospital Miri. The baby survived. She was said to have had relations with a logger but she denied this – however she was shaken and almost cried while denying that it had ever happened.
These are the cases investigated at length by the Jawatankuasa. It is a fact that the workers from the logging camp repeatedly took advantage of the very people who depended on them for transport, food and money. The Penans were taken advantage off by workers of these logging companies that resulted in the abuse of their women and girls. To take advantage of girls from the age of 10 onwards is despicable and deserved to be punished severely.

Malaysia is one of the worlds if not the world's largest supplier of tropical wood.
Therein lies the Penan problem. How will the Ministry of Women, Family and Community development plead the case of the Penan women and girls against the might of the Sarawak State Government – against Sarawak Chief Minister Abdul Taib Mahmud unless international condemnation of these bastardly acts are forthcoming. We know that the Federal Government will be reluctant to act against Taib. The result of the last election when Sarawak made the difference to Barisan continued stay in power is good enough reason for Najib not to do anything. But our condemnation and international pressure will make a difference. So please my friends think of what we can do. Demonstrate, write letters to anybody who can make a difference locally and internationally, hold aloft slogans supporting the Penans….anything to make this shame done by the logging companies and the others to the Penan known first in Malaysia and then the world. In a multiracial country such as ours it is how we look after our minority that will be the mark of our ability to respect and live with each other well. We should not fail the Penans.
Posted by STEADYAKU47 at Tuesday, September 15, 2009