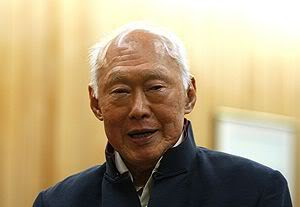 From littlespeck.com:
After saying that one-third of men and women in Singapore were single “and quite comfortable with their lives”, the Minister Mentor said: “My daughter is one of them. What can I do?”
Then in an unusually emotional mood, Lee told the young audience: “When she was in her early 30s, I told her, never mind all this.“My wife and I used to tell her, what you want is a “Mrs” (to her name). She didn’t think it was funny. Now, she is 50-plus. “I’m getting old. I’ve got a pacemaker. We’ve got this big house, everything is looked after now, but what happens when we are no longer there?
“Who’s going to run this place? Who’s going to make sure that the maids are doing the right thing and so on and so forth? That’s the price she (Dr Lee) will have to pay.“She says, I’ll look after myself, but she has not been looking after herself all these years.
“She went abroad for her studies. And her cooking was just to take the salmon and put it in the microwave and heat it up. You can do it and then go to the canteen, but when you do that day after day …“It’s a choice she has made and a choice that 35% of our women are making.”
Lee Wei Ling (Lee Kuan Yew’s daughter) as to the reason why she remained single – a good read.


My parents have a loving relationship, but I knew I could not live my life around a husband
By Lee Wei Ling

My father became prime minister in 1959, when I was just four years old. Inevitably, most  people know me as Lee Kuan Yew’s daughter.My every move, every word, is scrutinised and sometimes subject to criticism. One friend said I lived in a glass house. After my father’s recent comment on my lack of culinary skills, another observed: ‘You live in a house without any walls.’ Fortunately, I am not easily embarrassed.


As long as my conscience is clear, what other people say of me does not bother me. Indeed, I am open about my life since the more I try to conceal from the public, the wilder the speculation becomes.

My father said of my mother two weeks ago: ‘My wife was…not a traditional wife. She was educated, a professional woman… We had Ah Mahs, reliable, professional, dependable. (My wife) came back every lunchtime to have lunch with the children.’

Actually, my mother was a traditional wife and mother. She was not traditional only in one respect: She was also a professional woman and, for many years, the family’s main breadwinner.

One of my mother’s proudest possessions is a gold pendant that my father commissioned for her. He had a calligrapher engrave on the pendant the following characters: ‘xian qi liang mu 贤妻良母’ and ‘nei xian wai de 内贤外德’.
The first four characters mean virtuous wife and caring mother. The second four mean wise in looking after the family, virtuous in behaviour towards the outside world.My mother lived her life around my father and, while we were young, around her children. I remember my mother protesting gently once about something my father had asked her to do..

‘It is a partnership, dear,’ my father urged.

‘But it is not an equal partnership,’ my mother replied.

The partnership may not have been exactly equal at particular points in time. But over the years, especially after my mother’s health deteriorated after she suffered a stroke, my father was the one who took care of her. She clearly indicated she preferred my father’s care to that of the doctors’, in itself a revelation of the quality of his care.

I have always admired my father for his dedication to Singapore, his determination to do what is right, his courage in standing up to foreigners who try to tell us how to run our country.But my father was also the eldest son in a typical Peranakan family. He cannot even crack a soft-boiled egg - such things not being expected of men, especially eldest sons, in Peranakan families.But when my mother’s health deteriorated, he readily adjusted his lifestyle to accommodate her, took care of her medications and lived his life around her. I knew how much effort it took him to do all this, and I was surprised that he was able to make the effort.

If my parents have such a loving relationship, why then did I decide to remain single?

Firstly, my mother set the bar too high for me. I could not envisage being the kind of wife and mother she had been.

Secondly, I am temperamentally similar to my father. Indeed, he once said to me: ‘You have all my traits - but to such an exaggerated degree that they become a disadvantage in you.’

When my father made that pendant for my mother, he also commissioned one for me. But the words he chose for me were very different from those he chose for my mother.On one side of my pendant was engraved ‘yang jing xu rui 养精蓄锐’, which means to conserve energy and build up strength. On the other side was engraved ‘chu lei ba cui 出类拔萃’, which means to stand out and excel.The latter was added just for completion. His main message was in the first phrase, telling me, in effect, not to be so intense about so many things in life.


I knew I could not live my life around a husband; nor would I want a husband to live his life around me. Of course, there are any number of variations in marital relationships between those extremes. But there is always a need for spouses to change their behaviour or habits to suit each other. I have always been set in my ways and did not fancy changing my behaviour or lifestyle.


I had my first date when I was 21 years old. He was a doctor in the hospital ward I was posted to. We went out to a dinner party. I noted that the other guests were all rich socialites. I dropped him like a hot potato.In 2005, while on an African safari with a small group of friends, one of them, Professor C.N. Lee, listed the men who had tried to woo me. There were three besides the first. Two were converted into friends and another, like the first, was dropped.


I am now 54 years old and happily single. In addition to my nuclear family, I have a close circle of friends. Most of my friends are men. But my reputation is such that their female partners would never consider me a threat.More than 10 years ago, when there was still a slim chance I might have got married, my father told me: ‘Your mother and I could be selfish and feel happy that you remain single and can look after us in our old age.. But you will be lonely.’


I was not convinced. Better one person feeling lonely than two people miserable because they cannot adapt to each other, I figured.I do not regret my choice. But I want to end with a warning to young men and women: What works for me may not work for others.


Many years ago, a young single woman asked me about training in neurology in a top US hospital. I advised her to ‘grab the opportunity’. She did and stayed away for eight years. She returned to Singapore in her late 30s and now worries that she may have missed her chance to get married.

Fertility in women drops dramatically with age, and older mothers run the risk of having offspring with congenital abnormalities.Recent studies show also that advanced paternal age is associated with an increased risk of neuro developmental disorders in offspring, such as autism and schizophrenia, not to mention dyslexia and a subtle reduction in intelligence. Men can also suffer from diminished fertility with age although there is wide individual variation.


I would advise young men and women not to delay getting married and having children. I say this not to be politically correct. I say it in all sincerity because I have enjoyed a happy family life as a daughter and a sister, and I see both my brothers enjoying their own families.

Dr Lee Wei Ling
The writer is director of the National Neuroscience Institute.
Posted by STEADYAKU47 at Sunday, September 13, 2009