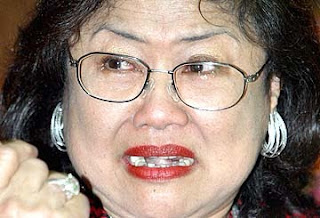 AP’s the cost to the Nation

The only way you can bring a completely assembled car into Malaysia is with an Approved Permit–known as AP’s.The rationale behind the issuing of this AP is to allow participation by Bumiputra in the auto retail business. Of course there are terms and conditions before you are issued with AP’s. You must have a showroom or a sales and service centre.

In lieu of a showroom or a sales and service centre  - being related to Rafidah helps, being a favored UMNO member helps. To quote Mahathir “almost everyone working in the headquarters (PWTC) had 10 APs each and was making RM8K a month selling them” So anyway you look at if you can get your hands on one AP - close one eye and shut the other – and before you can say Chan Mali Chan…that’s $8K in your hand.

The government issues on average 50,000 AP’s annually. With the kind of money that one AP makes – helping the Bumiputra factor becomes secondary to making billions for companies related to Ministers and their cronies – it becomes a means of becoming immensely rich and wealthy if you are favored this way year after year. Naza is a case in point – in 1997 alone the late Tans Sri Nasimuddin received 8925 AP’s – do the sum. That makes him a very very rich man.  A few favored UMNO Bumiputra companies are given the bulk of the 50,000 APs and Bumiputra businessmen in the motor retail business are forgotten. Former MITI officers have also got into the act -  Syed Azman and Mohd Haniff, both former MITI officers have been two of the biggest recipients.

Simply put – 50,000 AP's at RM30K each means the Nation is deprived of an income of ….…you do the sums…all this makes me sick to my stomach at the greed of these UMNO politicians....and they have the audacity to say that their National Car Policy is to help Bumiputras?