Weirdo Deputy Minister - from the blog of ZORRO UNMASKED


SPEAKING ENGLISH IN THE WORKPLACE IS WEIRD SAYS THIS WEIRDO! 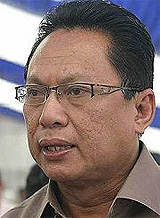 Deputy Education Minister Mohd Puad Zarkashi has said that speaking English in the workplace is "weird" and harmful to the nation's culture and identity.

He said employees in the private sector used English 99 percent of the time and should switch to Bahasa Malaysia in order to show pride in the national language, the New Straits Timesreported.
"This also occurs in government-linked companies where we have this weird culture of people speaking to each other in English instead of the national language," he said at the launch of a linguistics seminar.


Walawei, what do you know......he has a blog and is even on Facebook with this article of his. I give it to readers verbatim to see how English has been trashed by a Deputy Minister of Education.

I was opening the International Conference on Linguistics and Culture Development malay.. Conference is organized by UPM in cooperation with DBP.. The theme of this seminar is 'Pemerkesaan Malay identity as a nation-state building' I take the opportunity in the inauguration speech was to raise the matter that is the tree 'acculturation Malay' in .


Language is social capital and cultural capital. Nations that marginalize language is a nation that does not animate the race and there is no self-esteem.. Therefore language acculturation is very important. It will produce a nation that move collectively.. Feeling accountability thick. This is what Francis Fukuyama called, why have the Japanese culture Japanaese Incorporated. They have their own culture to language.


Language but the culture of Malaysians especially the Malays is very annoying, sometimes frustrating and sometimes disturbing. Just look at the language and text and language on the Internet. Very strange cultural language of the Malays today.


The first example, when the Malays chat chat among themselves, especially the elites, they like talking in English. What they need to converse in English. We do not like the French, the Japanese and Korean people. If talking to each other, they use their language, not English. Strange is that we both love to chat chat, especially those middle-class language use rojak mixed mixed between Malay and English. This is clear enough drama in TV dramas including those published in the TV 1 and TV 2. TV 3 do not matter. Skripnya we see is a script language that mixed mixed.  is the third culture people do not obey the French language as such abide by the language.  Although the French know and speak English, but they still speak French.


For those French have a long history. They claim that the French language in the diplomatic Erofah than English. Actually malay also aged 2000 years. Malay 6 stages of evolution have suffered from an ancient language to the language of modern. But what problems we are. The problem is that we can not distinguish perana Malay as the national language and English as a second language. We see the role of the Malay language as the language of official business only.. That is spotted. Next problem is that we are no longer as capable of not even want to control it GLC and private actions that make full use of English in their board meeting meeting. With the rapid development of the private sector, he feared, culture does not abide by this language become increasingly so.


The problem, the problem is not Malay, but our problem attitude.  That betray our own national policies or pollute citra cultural That's why there are meetings and meetings at the faculty senate that the university will use the English language entirely. This is a challenging acculturation Malay language in.


Please, don't anyone send him to any international conference!


He is not even welcome in the Fart Chamber.

steadyaku47 comment....methinks Brother Zorro means to make much mischief with posting this on his blog...and congrats brother - you have!!! I am still smiling away thinking of this deputy Minister of Education carrying our honor and dignity overseas...God help us....and I thought they did away with really stupid Ministers when that Maidin guy left...can't even remember his name...that Minister of Information lah!!