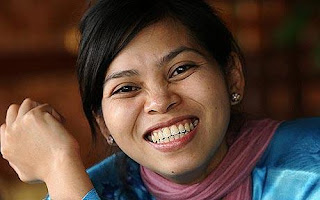 Prime Minister Najib Razak, meanwhile, urged the 32-year-old mother of two, Kartika Sari Dewi Shukarno, to appeal her sentence, in the strongest sign yet that the Malaysian government was seeking to head off a punishment that could badly damage its international reputation.

Have you asked the Syariah Court what they are doing about putting Razak Baginda on trial for his admitted affair with Altantuya? What about our Chief Justice and his illegal marriage across the border? Did he not commit Khalwat too? Or maybe nothing happened between those two? What about the Sultan of Pahang and his daughter, whom he begets out of wedlock – go ask the Syariah Court to do a DNA and resolve the matter once and for all. If the Sultan Of Pahang is not the father then he can sue the girl and her mother for defamation (after all he does need the money!). If he is the father then do the right thing and take care of her and her mother…should you not marry her Tuanku?

And then there are the other Sultans and VIPs who are fornicating outside their marriage all over Kuala Lumpur! Go make some noises in Parliament Mat and get the Syariah Court to do their duty. And do not forget that Raba Raba Minister in Washington. Recall him and cane him because he has been a naughty boy!

Then you can bring up in Parliament the many many Muslim girls in the Karoke Bars, the Night Clubs, the Spa and Massage Parlors who are under the protection of IPK Selangor and the Vice Squads goons.

When you have finished with them you can start with your fellow MP’s. You do not have to go far…there are some within the Cabinet itself. And they are all Muslims!

That is why Mat people are commenting on what the Syariah Court is doing. Have you not heard people say that Justice must not only be done but it must be seen to be done? Going after a 32 year old women drinking beer in a hotel lobby in Cherating Kuntan is not the way to go if you want to get respect.