Formula One - a formula for disaster? 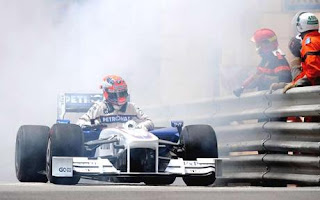 BMW withdrew at the end of this year season.

Toyota, Honda and BMW! What does that say about F1? F1 is simply not sustainable. And now Mokhzani Mahathir, Chairman of SIC’s  announces:

“Malaysia’s plans to start up and run it’s own Formula One team….If Malaysians need to rally behind an effort to unite our people, let’s use motor sports” and most important of all he reminds us that “Contrary to popular belief, motor sports isn’t just about fun and games but is big business in other parts of the world”.


A partnership between the Malaysian Government and a consortium of Malaysian entrepreneurs. What madness is this? You can put any spin you like into this but this is the bottom line. The Barisan Nasional Government will be using hundreds and hundreds of million, if not billions of our Ringgit to finance an entertainment spectacle that will financially benefit their cronies and big business. Najib and Rosmah will enjoy their delusion of grandeur –  he having that few seconds of glory when giving away the F1 trophy to the winners at Sepang and she putting on her Islamic Fashion Show in Monaco!

Are we to be taken as idiots again? No businessman in Malaysia  not even Lim Goh Tong (may he rest in peace!) if he was alive today would have the audacity to invest in Formula One anywhere in the world – what more in Malaysia! Unless that businessman has been able to conned the Barisan Nasional Government to come up with the billions of Ringgits of Rakyat money to “invest” in this Man Telor of a scheme! And it looks like Tony Fernandes and his team have been able to do just that! Congrats Tony..but that Najib guy is not that bright is he?

Call this F1 Team anything you like but not 1Malaysia F1 Team Sdn Bhd. Because when it fails, as it surely will, it is Malaysia that fails on the world stage.

Somebody better tell Najib that hitching his 1Malaysia to F1 will not make it a success.

As for what participation in F1 will bring to Proton, Lotus or Petronas in terms of innovation and product development - just understand this - with globalization everyone has access to the same material, manpower and technology. F1 is simply not sustainable. It is just entertainment and big business – not for the masses but for the political Elites and their cronies.

But what can we do? We have a government totally out of synch with the realities of what its people want. We must find a way to put the fear of God into this Barisan Nasional Government before we too are drag into the abyss of corrupt and greedy cronyism that they have all comfortably settled into at our expense. I know that we still cannot keep these bastards honest but let us not forget to keep our anger burning. Keep our anger burning so that we will not forget what we have to do come the next General Elections to kick these Barisan Nasional bastards OUT! Keep our anger!

Email ThisBlogThis!Share to TwitterShare to FacebookShare to Pinterest
Labels: Formula One - a formula for disaster?