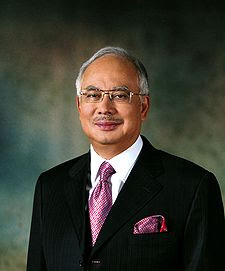 Truth. Accuracy. Substance. Relevance. None of these matters as Najib does all he can to prevail by fair or foul means….mostly by foul means. He gives notice by his deeds that he will no longer be bound by common decency or natural justice expected of those given the privilege by the people to govern. He does not even make a respectable try to cover up its brazen attempt at controlling the Internet. All he does is simply to Deny! Deny! And Deny! Deny that he and his goons are doing anything and yet routinely bloggers are having problems with their sites. It is as if by denying that they are doing anything they are absolved of any transgression that they are actually doing anything. With each deception the public contempt and disgust with these tactics become more acute and pronounced. And censorship of the internet by the government becomes a self-fulfilling prophecy.


The day after Bala front up with a signed SD he comes up with another SD denying the first one. Najib do you think we are that stupid? Do you actually think that he Public will fall for such a spectacular ruse? He disappears for 18 months. Now yesterday another story about the deception comes out in MT2Day – and a few hours later that article disappears. And I know that the boldest denial will surface in a few days denying that Najib has anything to do with all this hoopla of Bala resurfacing. Like he denied having anything to do with Saiful until the facts undeniably linked him to Saiful!


You cannot covert the office of Prime Minister of Malaysia in order to safeguard your prosecution as an accessory to the murder of Altantuya! Why not we all drop the pretence. We know as you know that the only thing keeping you from being part of the case is that as Prime Minister you have the ability to control what happens in this country. Anywhere else there would have been enough evidence to drag you into court, put you on trial and put you away with Razak Baginda for a good long time. But then this is not anywhere – this is Malaysia. And the Judiciary and the Police will do your bidding.

But while they do I doubt Najib’s ability to not lose sleep over this issue. It will not go away. This is what I wrote in my blog on January 20th before Najib became PM:

How this guy is going to shake of the excesses of his wife and himself from the time they knew each other (while married to other people) until he became a serious PM contender is something I will watch with anticipation and trepidation (not for me but for him). It will take a monumental effort to contain their goings on - sexual and financials. Can you imagine the amount of money that would be required to keep everybody quite? What contracts, projects, tenders have to be kautim in order to contain these possible exposures - anyone of which, if they become public knowledge, will mean no more Sri Perdana? The mind boggles...and that is why Mahyiddin (the Man who would be King) is cool and waiting in the wings. For me Najib is just a temporary blip in Mahyiddins journey to Sri Perdana. Najib will be so tied up covering his sordid past that he will not have time to Govern... he will not go past a year or two at the most.


And now we see it all unfold. There are just too many people involved in keeping Najib seemingly above all the hoopla that surrounds his involvement with sordid deeds. His numerous affairs, Altantuya, corruption and deception – all it would take is one break in the thread that bonds all this together and he will be out of a job before you can say Puteri Gunung Ledang. For now uneasy lies the head that bears the crown. It is not a matter of if but when he goes. I still go by what I said in January 20th 2009…he will not go past a year or two at the most.