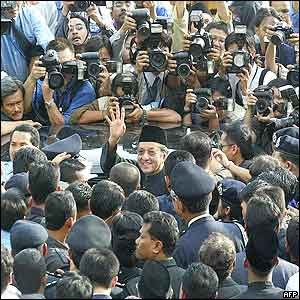 What more does Tun Mahathir wants? Have you not got enough Sir? You have money. Your children have money – enough money to last possibly three to four generations of your family tree (and I am being conservative here!). Well most of that money should really belong to the Rakyat but possession is 99.99% ownership – so until the court decides otherwise, it is theirs to do as they like.


You want a legacy to leave behind so that people will remember you? Do not worry Sir you have done enough for the people not to forget you. Possibly their children’s children might still remember you because it might take that long for the Nation to recover from paying for your legacies. Twenty over Billion Ringgit for Putrajaya…and that is just for starters…so do not worry Sir – they will not forget you!


You want Power Sir? Buat apa? In case you forget Sir, Pak Lah is no longer PM…no Sir he really is no longer the PM (orang tua ni dah nyanyok ka?) …and KJ did not get any position in Cabinet…your son Mukriz did! Yes Mukriz is still doing business but he has to attend cabinet meeting at least once a week.


Thank you once again Sir for your contributions to the nations…the country will never be able to repay you for what you have done. We cannot repay you because we and our children and our children’s children will first have to pay for the things you have done….Putrajaya, Twin Towers, KLIA, all the Highways etc etc …. forever and forever and forever……