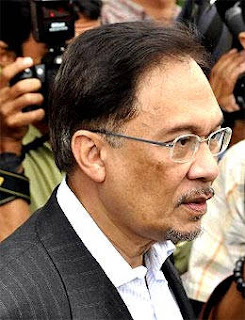 Sometimes we will find amongst us an individual who by his deeds will wake the conscience of an entire nation. This was what happened in September 1998. Over ten years ago there was Reformasi – before Pakatan Rakyat, before Najib or Mahyuddin. This Din guy was still wet behind his ears. How many of you still remember what happened in that month of September in that year? Tell me…how many of you? Let me refresh your memory. Did you remember this announecement on TV3?

Anwar sits quietly as balaclava wearing police stormed into his house. He sits calmly amongst the madness beside his wife telling everybody to “Relax. Relax”. And then he was taken away.

The next time we saw him he had a black eye and he had been severely beaten by the Police. This was how he later described the beatings: “I was arrested. Blindfolded. Handcuffed and I was assaulted severely…unconsciousness until the following day. After I regain consciousness I was quite sure that they would not allow me to live…prefer me dead….I was crawling to the bathroom”.


Then his trail by a reprehensible Judge call Augustine Paul doing the bidding of Mahathir! Anwar was sentenced to fifteen years jail on trumped up charges of sodomy and abuse of power. Remember his family together across the river? 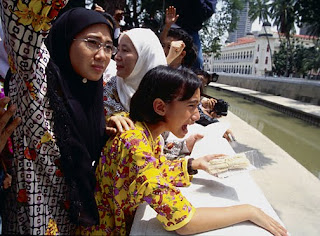 He was in solitary confinement with a camera on him 24/7 for six years. He was freed on a Thursday 2nd September 2004. “As Judge Abdul Hamid Mohamad read out the verdict over 1 1/2 hours it became apparent that Anwar, 57, would be freed. The prisoner—wearing a neck brace and confined to a wheelchair—exchanged excited glances with family members and gave a thumbs-up sign”. The IRRAWADY. 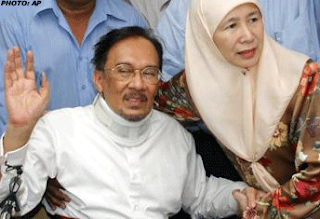 
Now all that is forgotten. As forgotten as Guan Eng's time spent under ISA for championing the plight of a Malay girl against the then Chief Minister of Malacca -Rahim Thambi Chik. As forgotten as the riots of May 13 1969 when Chinese and Indians were mowed down by the Army and the Police! As forgotten as the Memali Incident, Ops Lallang as Hamid Tuah as were all those downtrodden and oppressed people who had fought against the might of the Barisan government against injustice and lost. How you all easily forget. What more commitment do you want from Anwar, Kit Siang and Tok Guru? How can anyone question their passion to do their best for the people of this country? Do you think that they do not wake up each morning focussed on what they have to do to make PR strong against UMNO? Can anyone say that they have not done enough?


Each and everyone of us will need to sit down and decide - if you have still not done so. Our time is running out. Are we with PR or with UMNO. With Anwar or with Najib? With Right or with Wrong. With the corrupt or with the clean? With greed, deceit and arrogance or with decency,justice and righteousness. There really is no choice to make. It is always PKR/PR/Anwar/Kit Siang and Tok Guru …has always been, should always be and will always be. They will say that I am Pro Anwar. Yes I am. I am also Pro PR, pro justice, pro decency and pro equal rights for everyone in this country…and I am proud of it! Come join me and together let us make Pakatan Rakyat's  fight against UMNO that little bit easier.